A new Moabi report highlights that efforts to slow forest loss in the Democratic Republic of the Congo face growing challenges from expanding mining and logging interests. The DRC government’s flagship REDD+ program, Mai-Ndombe, has seen a dramatic increase in artisanal logging permits and new exploitation mining permits have been issued in other REDD+ priority zones. Moabi's report focuses on geographic areas that are critical for reducing forest carbon emissions in DRC: the Mai-Ndombe jurisdictional program, the supply basin of forest resources to Kinshasa, eight REDD+ projects, and the US government-financed CARPE program located in six regions of the DRC.

Building a picture of conflict

To conduct this analysis, the Moabi DRC consortium analysed data from Congolese government ministries and national and international environmental NGOs. Data came from the time period between July 2013 and July 2015; however, data for artisanal timber exploitation represents only 12 provinces (Kwango, Kwilu, Mai-Ndombe, Equateur, Tshuapa, Mongala, Sud Ubangui, Nord Ubangui, Tshopo, Bas Uélé, Haut Uélé, and Ituri) for the period between July 2013 and July 2014. Overlaps between REDD+ activities and natural resource extraction activities were identified and quantified. Findings have been validated by a group of experts representating the institutions that provided the geo-referenced data.

Between 2013 and 2015, the pilot REDD+ projects at Mitotshi Kabobo and Tayna were stopped due to high operation costs. Difficulties in engaging local communities in the REDD+ pilot project areas may have also extended the duration of the project appropriation process. In addition, the complexity of a REDD+ project design process, low carbon prices, national law ambiguities, and land tenure insecurity remain strong constraints for the current and prospective REDD+ project developers. 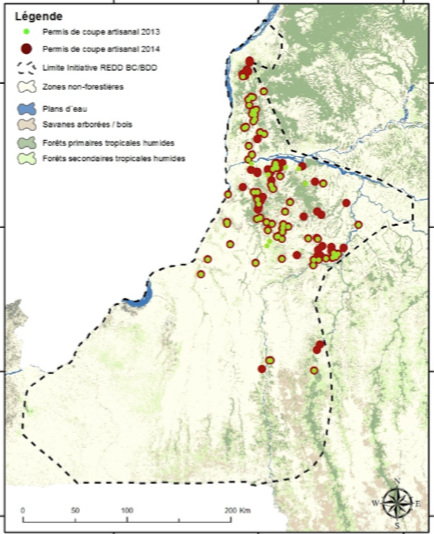 Overlapping mining concessions with the Maiko, Ituri, and Virunga landscapes

The study also found that nearly all of the forests of the DRC are overlapped by oil exploration concessions, with some REDD+ projects and initiatives 100% covered by such concessions, such as the Mai Ndombe jurisdictional program. This overlap includes not only REDD+ areas but also national parks including the Salonga National Park, a World Heritage Site. This risks an extension of the same kind of conflict that has already occurred between Virunga National Park in eastern DRC and oil companies.

Within the Mai Ndombe ER program, 36% of the forest area is covered by industrial logging concessions, and over the past two years the number of artisanal logging permits within the project area has increased by 29%. Both industrial and artisanal logging operators are likely to be key players in the reduction (or the contrary) of carbon emissions within the program. Critical reflection of how to integrate logging operators into the Emissions Reduction Reduction Production program is needed.

US government-funded support for REDD+ also faces conflict. Within CARPE program landscapes, artisanal logging permits represent a significant threat to efforts against deforestation and forest degradation. There has been a 19% overall increase in the number of such permits over the past two years within CARPE landscapes, with some landscapes witnessing a 50% or higher increase of permits, such as at Salonga. It is also worth noting that several CARPE landscapes are completely covered by oil exploration blocks.

Can conflict be avoided?

This study highlights the overlapping activities and conflicting goals within REDD+ areas of the DRC, and illustrates the need for greater coordination between the ministries responsible for the management of natural resources. Conflict, however, cannot be easily avoided. REDD+ continues to suffer from a lack of funding, legal frameworks, a functional safeguard system, and a sufficiently high price of carbon to compete with other land uses. Mining, logging, oil, and potential industrial agriculture all present lucrative opportunities that will likely lead to forest clearance. While many commodity prices remain low, policy makers have the opportunity to plan and implement a more comprehensive and integrated approach to land use planning. REDD+ proponents can also take steps to minimize and avoid some risks: