Land use is a crucial factor in both economic development and the environment. Land dedicated to agriculture allows regular production which benefits nearby populations, meeting their food needs, and potentially benefits the economy as a whole. On the other hand, agricultural land has a much lower carbon content than forest land and is generally poorer in biodiversity. Land can be used in different ways to achieve different goals and it may be difficult to achieve all goals at the same time, which means making difficult choices when designing policies. The Democratic Republic of Congo (DRC) is the largest and most populated country of Central Africa. Humid dense forests cover 114 million hectares which represent half the DRC territory. According to the United Nations forecast, DRC will become the tenth most populated country in the world by the end of the century with more than 200 million inhabitants. Considerable efforts will be needed to improve livelihoods without exhausting large natural resources of the country.

Models make it possible to explore the consequences of future changes in a simplified context. The GLOBIOM (www.globiom.org) model, a global economic model which represents land use competition between the agricultural sector, the forestry sector and the bioenergy sector, is used to simulate future land use change in DRC over 2000-2030. The first 2000-2010 period enables testing of the model’s capacity to reproduce past trends. Deforestation is modelled on the basis of changes in production and consumption for all countries at the same time. Thus, we can more easily verify the validity and consistency of estimates and avoid an artificial increase in future deforestation unrelated to changes in demand. The spatial resolution of the results allows for consistency in deforestation calculated at sub-national level with deforestation calculated at national level, as well as enabling heterogeneity of carbon and biodiversity to be taken into account.

Figure 1. Overview of the GLOBIOM model

According to conservative projections, close to 105 million people will be living in DRC in 2030, with a strong increase in urban populations and average per capita GDP. A larger and richer population generates an increase in local consumption of agricultural products which is translated into an increase in cultivated areas. Our results show increasing deforestation from 374 000 hectares per annum over 2000-2010 to 643 000 hectares per annum over 2020-2030. This leads to the emission of 7 gigatons CO2 over 2010-2030. Almost two thirds of the calculated deforestation is explained by the expansion of cassava and the fallow land associated. Oil palm explains 15% of total deforestation. 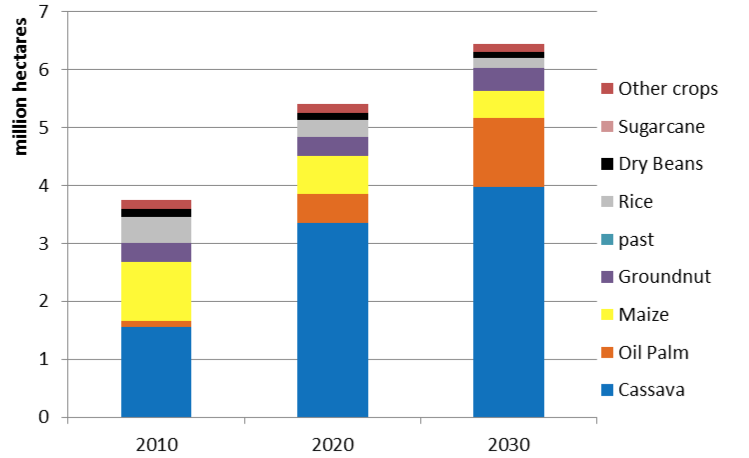 Figure 2. Trend in deforestation by cause in DRC between 2010 and 2030 in the base scenario

The model predicts a lot of deforestation in the Bandundu province due to local population increase and the proximity with Kinshasa. Some other important hotspots of deforestation are in the Sud-Ubangi, the south of Maniema, in the Ituri close to the border with Uganda, and close to the border with Tanzania in Tanganyika. DRC is home to Great Apes which are very dependent on the presence of natural forests for their habitat. They are also species that are potentially a great attraction for the development of ecotourism. The model forecasts a particularly substantial loss of habitat for Great Apes in the eastern region of the DRC. In addition to the direct loss of habitat, the expansion of agricultural areas will lead to an increase in contacts between wildlife and human thus increasing poaching risks.

Future deforestation due to increased local demand would be even higher if food imports would not increase and if some expansion of agricultural land would not occur in non-forest types of vegetation as we currently observe in our results.

Current crop yields are low in the Democratic Republic of Congo. Reliable statistics are lacking to have a good overview on productivity trends in agriculture but the general feeling is that yields have stagnated over the last decades. When we implement a scenario where crop yields would increase by more than 50% for cassava or more than double for corn, total deforestation reduces to 8.6 million hectares over 2011-2030 instead of 11.8 million hectares in the base scenario. This would translate in an increase of calorie produced by inhabitant by 25%, a cut of emissions from agriculture and land use change by 30% and a reduction of the number of species which could lose more than 10% by 14%. This suggests that increased agricultural productivity could reconcile agricultural development, climate change mitigation and biodiversity conservation.